Everything you want to know about Microsoft's The Outer World.

Scheduled to be release on October 25th, The Outer Worlds is a long-anticipated game for those of us with a love for role-playing games. Developed by none other than Obsidian Entertainment; pioneers of the genre whose portfolio includes beloved titles such as Fallout:New Vegas, Star Wars Knights of the Old Republic II, Neverwinter Nights 2, and Pillars of Eternity.

The announcement trailer for The Outer Worlds featured impressive graphics, a groovy soundtrack, and the evils of capitalism.In a year that has been relatively lackluster for RPGs, the Outer Worlds looks like water to a thirsty man.

Something happened last year that many of us conveniently forgot about. Obsidian Entertainment may not be the company you remember it to be.

The internet may have forgotten, but I have not. Back in November of 2018, Microsoft acquired Obsidian Entertainment (right before the announcement of The Outer Worlds a month later in December).

Microsoft has risen to prominence within the gaming industry as having paved the way for terrible ideas. It’s the company that insisted that online gaming should cost money (Xbox Live) and inevitably convinced competitors like Sony to start charging for it too. Microsoft seemed to piss off Bungie (the developers of the famed Halo Series) enough to cause them to divorce from Microsoft almost entirely back in 2007. Remember, this was the company that insisted that games released on the Xbox should not have free DLC expansions because it would set a bad precedent (i.e.,they wouldn’t be able to charge for DLCs produced by their studios). Yeah, that Microsoft.

Now, perhaps The Outer Worlds will be a turning point for Microsoft, and it will turn out too genuinely be that refreshing glass of water that we so desperately want. God knows Microsoft needs a win in the PC gaming world if they're going to maintain their dwindling influence. Many gamers are gravitating away from console gaming and to PCs. However, if Microsoft does what they usually do with their PC titles, it will be another disaster. Since they typically fill their games with micro-transactions, paywalls, and other game mechanics that leave the player wondering, “where’s the rest?”

Alright, somebody set the table because I’m about to eat a big piping hot plate of my own words.

The Outer Worlds is a great RPG, with worlds full of vibrant characters, deep plot lines, and consequential choices. Amazingly, there seem to be no Microsoft fingerprints anywhere on this game. They said their acquisition of Obsidian Entertainment wouldn’t affect the development of The Outer Worlds and hell if they weren’t true to their world. I commend them for allowing the game to be released in its current form.

Let’s focus on the two major components of a role-playing game:The Lore and The Game Mechanics.

Personally, I didn’t find the main plot to be super compelling.Perhaps I’m a bit too apathetic toward the whole “capitalism is evil” concept, but nonetheless, it failed to hold my interest. The beauty of The Outer Worlds comes in the intimate conversations you have with key characters and your ship’s crew members.

So far, I’ve spent about 50% of my time in dialogue alone. Almost every character has a story to tell, but not all of them are willing to tell it to a stranger. Some characters require you to coax the story out of them and either play to their personalities or accept that you won’t get 100% of the information you’d like out of them. The wide variety of personalities and opinions makes dialogue feel natural and paints a beautiful landscape of the world that the game creators wanted you to experience.

The story seems to have very few restrictions, as every character is killable and thus non-essential. Similarly, conversing with characters is also optional, and while this might lead some to think, “Doesn’t that undermine the value of those conversations?” The answer is no. It only makes those conversations that much more of a unique experience which true role-players can revel in. If you disagree with a character’s disposition, argue with him. If you find religious debate to be of interest, embark on a 20-minute long conversation about the various religions in the game’s world. Not a man of many words? Shoot first and ask questions later.

There are no wrong answers. 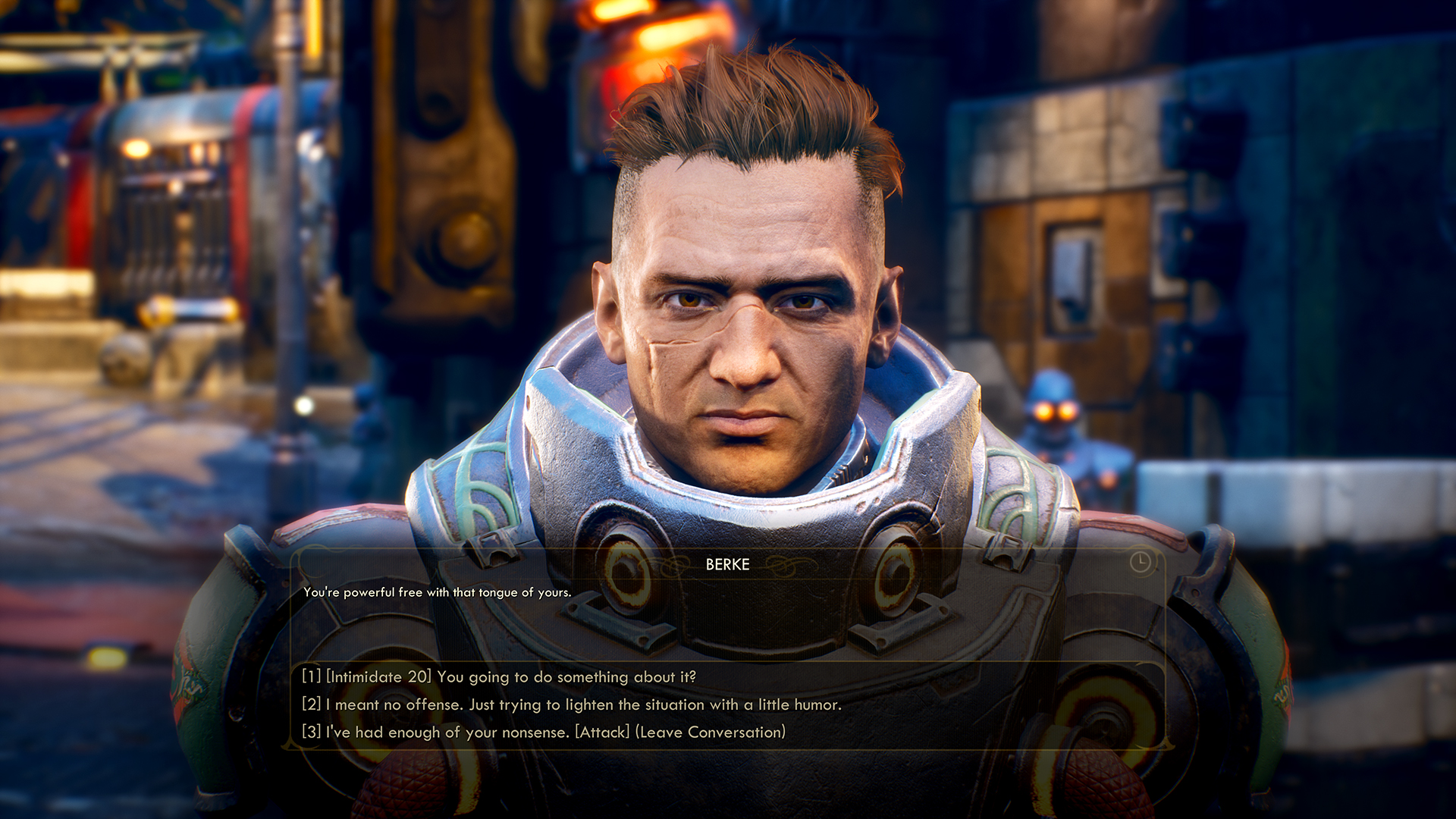 The combat system is adequate, though nothing to write home about. It’s very reminiscent of Fallout New Vegas, which Obsidian Entertainment was also responsible for, so veterans of that game know what they’re getting ahead of time. There’s a feature that allows you to slow down time temporarily mid-combat, enabling you to think tactically. I have used it a total of probably five times, as it doesn’t provide much of an edge.

The difficulty setting was a bit frustrating, as well. Unless you’re playing in Supernova mode (which adds a bunch of mechanics to the game such as needing to eat, drink, sleep, etc.), changing difficulties only changes how much damage you deal and how much health you have. I started out by playing in Hard Mode as a melee-based character. Combat felt virtually impossible for the first five levels, so I turned the difficulty down a notch to Normal. The game went from grueling to childish as I walked up to characters and slapped them to death. After a few more hours and a few more levels, the combat felt so unfair that I switched back to Hard mode, but now that I had some more experience and character perks, the combat felt easily playable. 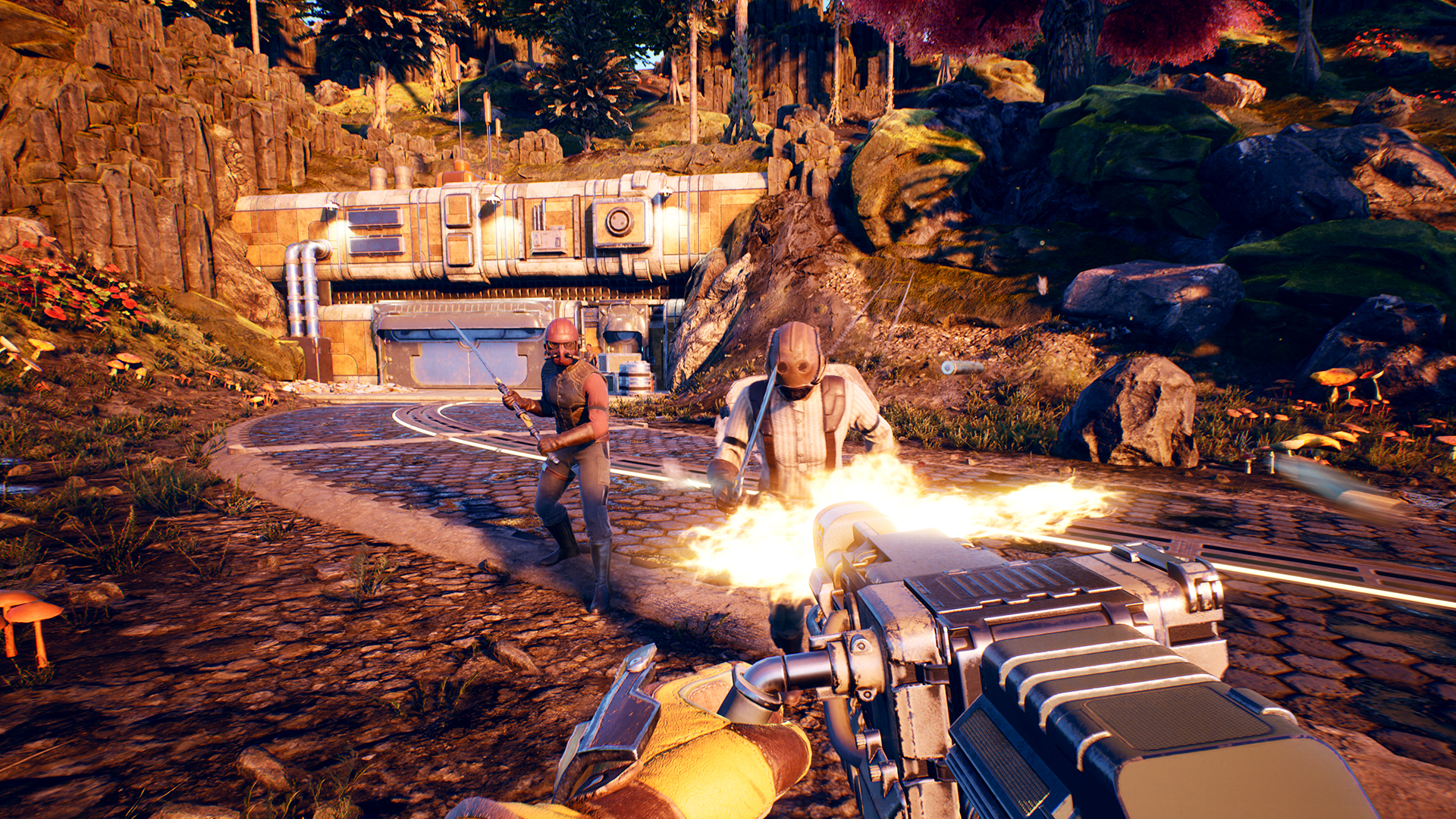 What saved the game for me, as far as mechanics go, was the way character skills worked. The skill trees are a bit unique force you to really consider which path you want to go down. Choosing not to invest in lock-picking means you will probably miss out on some sweet loot, but not choosing dialogue skills means you won’t be able to glean as much information from conversations. In most RPGs, I would do my regular game-breaking routine of farming infinitely generated enemies for experience points to invest into maxing out all these skills. Still, in The Outer Worlds, sources of experience points are somewhat limited, and resetting skills are pricey, so these decisions carry real weight.

If you’re looking for a game that lets you experience insane, engaging combat, Call of Duty: Modern Warfare happened to launch the same day as The Outer Worlds; go play that instead. If, however, you prefer to embrace a true role-playing game and wrap yourself in a blanket of well-woven stories and character development, then The Outer Worlds is right for you.

Manufacturers are Allowed to Leave Bugs in Your Food
4

Your Neighbors Are Arming Themselves, Are You?
5

America is Preparing for a War Against Space Aliens
8

Marijuana is Killing the Alcohol Industry
9

Manufacturers are Allowed to Leave Bugs in Your Food
4

Your Neighbors Are Arming Themselves, Are You?
5

America is Preparing for a War Against Space Aliens
8

Marijuana is Killing the Alcohol Industry
9

Vitamins are a Waste of Money
View Fewer View More

CultureAlan Bursky
James Bond, The Last Great SexistIt's only a matter of time before the Me Too movement comes after James Bond.

CultureAlan Bursky
You're So Easy To Fool, But It’s Not Your Fault.The Mandela Effect and false memory. Do you really see, see and hear what you see and hear?