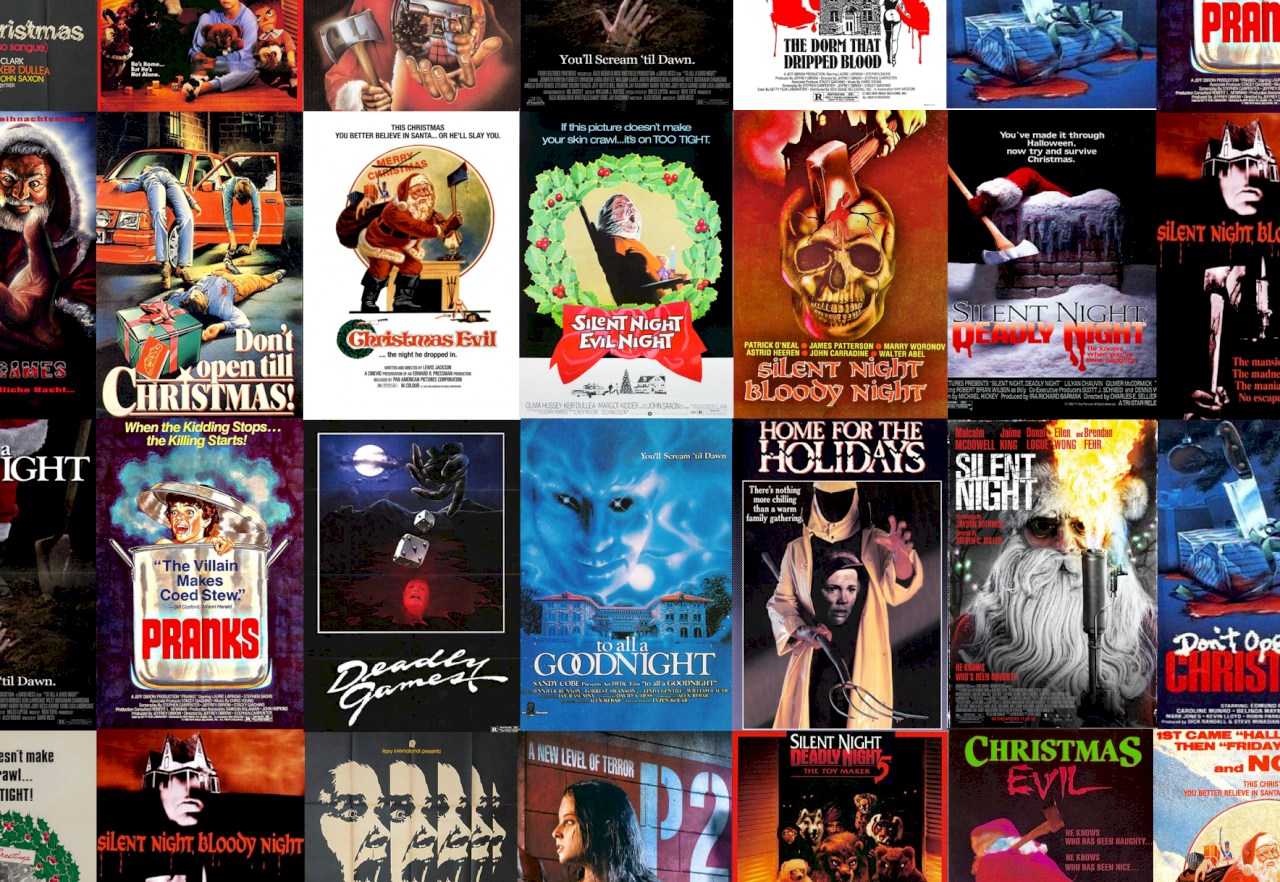 A complete list for anyone looking for some bloody, good Christmas fun.

Everyone loves Christmas movies. But how many times can you watch It's A Wonderful Life, or A Christmas Carol, or How The Grinch Stole Christmas? And everyone now and then a new Christmas movies gets made, Noelle from Disney starring Anna Kendrick is a good example. So it's time to talk about another sort of Christmas movie. Come on, we're all adults here and know Christmas isn't all joy and happiness. And neither is Christmas movies. Some are made to be just the opposite - frightening and demented.

Just as Santa keeps a list of the nicest and naughtiest kids of the year, we keep a list of our favorite evil Christmas titles. For every A Christmas Story about a kid dreaming for their wishes to be fulfilled by Santa, there's a Black Christmas about kids just trying to survive a knife-wielding mad man on a wintery night. And with that said, let's look out our favorite movies from the naughty list.

This is the must-see holiday slasher every year. Directed by Bob Clark, who ironically nine years later would direct the all-time classic, A Christmas Story, unknowingly created what is now considered the father of the slasher genre years before John Carpenter's Halloween was given the title; and in fairness, Halloween is a Halloween movie, not a Christmas movie. Black Christmas also originated the urban legend idea about the "killer is in the house" that was later popularized by Wes Craven's Scream. Here, sorority sisters are harassed by phone and eventually stalked and killed by an unseen killer, who is closer than anyone would ever imagine.

Christmas Evil (1980 aka You Better Watch Out)

A weird and trippy slasher film often referred to as the Taxi Driver of Christmas movies. Is there anything more deranged than a boy perfectly envisioning Santa delivering joy and happiness, but then in reality witnesses his mother having sex with Santa (who is the kid's dad in costume)? Of course, it triggers something deep within him to become so obsessed with Santa Claus that he wants to be Santa Claus as he gets older. To fulfill this lifelong ambition, he works in a toy factory only to be disappointed by business politics and the ugliness that people can have, which drives him to create a real naughty or nice list. He then dons his Santa outfit (four years before the idea of a killer Santa became iconic in Silent Night, Deadly Night), and wreaks bloody havoc, and leads to a real WTF moment of an ending.

Deadly Games (1989 aka Dial Code Santa Claus, aka Game Over)

This gem is being rediscovered as the dark version of Home Alone, but was actually released in 1989 a year before Home Alone (and its French director Rene Manzor is very vocal about who came first)! A young boy is left alone on Christmas Eve when a Santa Claus outfit wearing home invader breaks in. But what the invader doesn't suspect is that this kid has a few "deadly tricks" up his sleeve. What's particularly smart about this is the kid actually believes it really is Santa who's come down the chimney and upset with him because he stayed up all night to get a glimpse of jolly old Saint Nick. After seeing this movie, Santa might reconsider who he puts on the naughty side of his list.

In film, as in many other fields, there is a range where some films become the epitome and others the antithesis. Your mileage may vary, but this one is somewhere in between. Don't Open Till Christmas is pure 80s exploitation sleaze, but differs in that it plays more like an Italian giallo film complete with a gloved killer whose identity remains unknown until the end. Its off-kilter sensibility is likely an artifact from it being a UK production, (sorry UK friends). But its most notable aspect is that unlike other iconic Christmas slashers of the 80s where the killer dons a Santa outfit, this one is about a killer who bloodily rampages against people wearing Santa outfits. So, of course, a sting operation is set up where cops go undercover as Santas to lure the killer.

The Dorm That Dripped Blood (1982 aka Pranks, aka Death Dorm)

Originally placed on UK's notorious list of banned video nasties, The Dorm That Dripped Blood hits all the beats of a classic slasher film in a no-frills, but in a classic cheeseburger kind of way, which is precisely why we like it. The story takes place on Christmas Eve, when a group of students volunteer to prepare their dormitory for demolition. While doing so, a psychopathic lunatic with a secret motive starts to pick-off of students. However, this film is most famous for being Melrose Place resident Daphne Zuniga's acting debut and made by a pair of UCLA students with school equipment as a calling card into Hollywood.

Starring Sally Fields and produced by Aaron Spelling, Home For The Holidays involves a wealthy father, who, on his death bed during Christmas, requests his four estranged daughters home by his side. The kicker is, he tells his daughters that he suspects his second wife of trying to poison him, and in turn, these lovely gals hatch a possible plan to murder their step-mother. But before they can put their plan into motion, a stranger with a yellow raincoat and a sharp pitchfork arrives to show them who's boss. The killer's definitely inspired by I Know What You Did Last Summer, which also has a killer wearing the exact same outfit. All in all, you have to love the Home for the Holidays gift-wraps murder plots.

This movie is less of a remake and more of a reimagining of the cult classic Silent Night, Deadly Night. And while most horror enthusiasts scoff at remaking classics, after all, once the blood is dry, it's time to move on. But this version is nasty and brutal in all the right holiday horrible ways — a variety of inventive kills, including the first victim who gets fried by an electric chair created from Christmas lights. You have to admit, it's difficult for Christmas slasher films to be remembered for iconographic imagery, but a flame-throwing wielding Santa Claus? Yes, please!

And while Black Christmas and Halloween jostle for the title of the first slasher film, Silent Night, Bloody Night also has some rights to that title. Released before both of those films, this spooky mansion chiller, Silent Night, Bloody Night, is more horror whodunit, but also has elements seen in both Black Christmas and Halloween. The story takes place over Christmas Eve when a man who has inherited a family estate, which was once an insane asylum, is seemingly stalked by an escaped asylum inmate who has taken refuge within the home. Also, this film boasts a colorful cast lead by some Warhol's "factory" players, which kind of gives new meaning to "the art of film making;" okay, maybe not.

Though this film was not the first to have its killer dressed as Santa or even have its killer so negatively influenced by Christmas as to go on a vicious slashing spree, this is the film where parents, religious institutions, PTA, and moral groups said "No more." The TV ads were so effective that these groups furiously protested so much that TV stations succumbed to the pressure and dropped the ads, and some theaters swiftly dropped the film. This, of course, made it a smash for horror film lovers and a real milestone. Whereas Black Christmas relies on mood and atmosphere, this was more like a jolt to the senses with its non-stop visceral violence and overall mean attitude. The story is simply about a young boy who witness the murder of his parents on Christmas eve; and with his Catholic upbringing, seeds his mind with a thirst for revenge against those he deems naughty. Hey, "an eye for an eye."

Unlikely that most horror cinephiles regard this as a great film. To All A Goodnight is more of a candidate for slasher completists. But there are so many strange and odd choices that can't help but be loved. The real draw is the director, David Hess, who years earlier became a cult figure for his demented roll in Wes Craven's The Last House On The Left. And what seems like a typical stalk-and-slash is a little more interesting in that it predates a lot of ideas that would later be popularized by the slasher films that followed, including films on this list. A group of students who have stayed over the holiday break in their dorm become hunted by a killer who wears a Santa costume. Fans of Friday the 13th will see why there is talk about this film claiming it may have inspired the original movie in that series.

That finishes our list for now. So once the kids are happily tucked in bed, and you have the television to yourself, you know what to watch. (Imagine that spoken in a fiendish voice.)