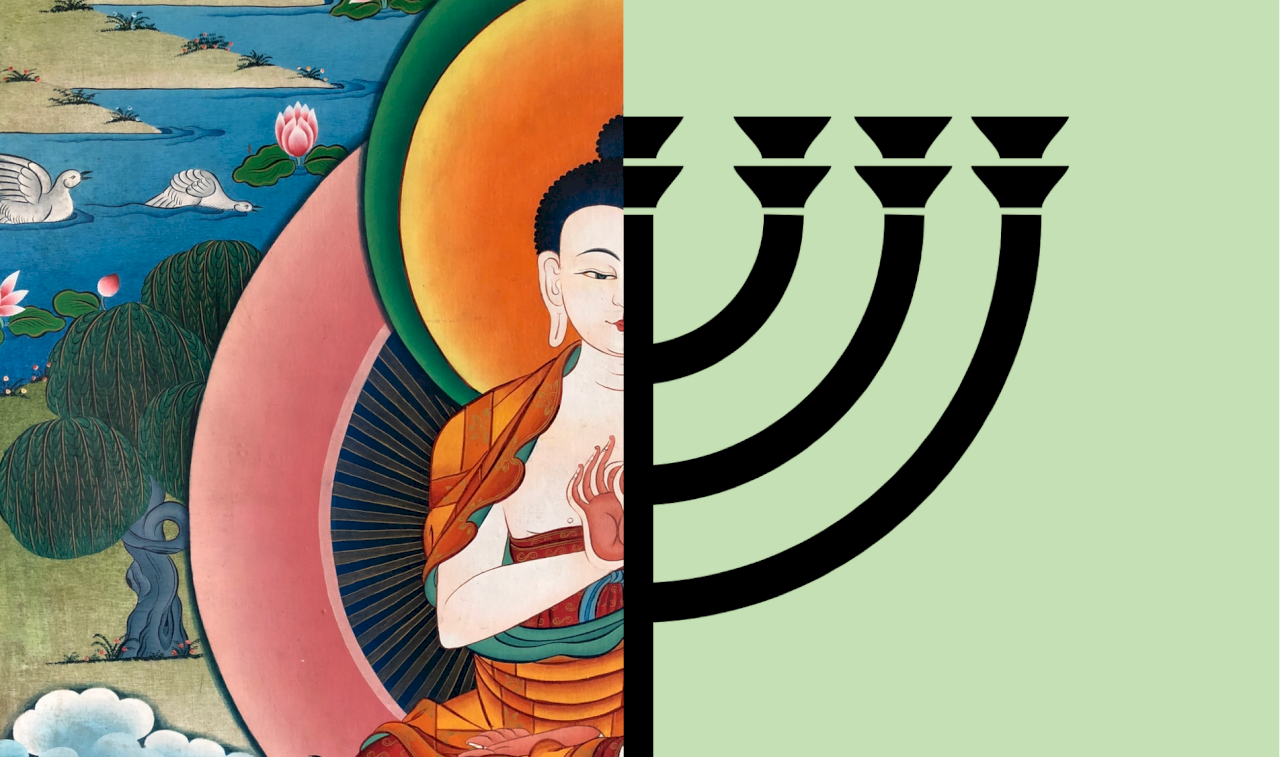 The Buddha-Jew -- the Newest form of Judaism

Buddhist or Jewish ... trying for the best of both worlds.

What do you call a Jew with mind control? A Buddhist Jew.

All jokes aside, what is it about Buddhism that appeals to Jews? Jews only constitute 0.20% of the world population -- not even half of one percent -- yet upwards of 30% of North American Jews consider themselves Buddhists as well. This half religion, half philosophy seems to serve as a halfway house for Jews who have lost their way.

Maybe the non-theistic nature of Buddhism makes it easier to swallow for Jews who aren’t sure that there’s a God. Maybe Buddha’s big belly reminds Jews of their own bellies at Bubbe’s house. Or, perhaps it’s because Jews are a people who’ve suffered great losses since their inception nearly 4,000 years ago, the emotional weight passed down from generation to generation, with Buddhism offering an appealing path to lift that burden.

Despite how similar they seem on the surface -- both focus on being present in the here and now, offer a way to connect with something greater than ourselves, and seek to help others -- Buddhism and Judaism are fundamentally in opposition to each other. Let’s explore a few incompatibilities:

1) Buddhism celebrates celibacy as staying true to your highest path, but Judaism considers a husband sexually satisfying his wife to be an even greater commandment than procreation. Since Buddhists believe that desire causes suffering, monks are expected to refrain from sex. Jews, however, believe that this world is meant to be enjoyed. Orthodox Jews, in particular, believe that a married couple having sex pleases God. Could we get an “amen!?”

2) Buddhism’s primary aim is to eliminate suffering, whereas Judaism is spiritual perfection. While they seem similar, the key difference here is that in Judaism, suffering is reduced as a natural consequence of spiritual perfection without being an aim in and of itself.

3) Buddhism rejects the idea of a Creator, while Judaism accepts the existence of God. This last one is key: it’s simply impossible to be both a Buddhist and a Jew when Buddhism doesn't believe in God, while Judaism’s fundamental tenet is that there is one God, and He exists. Do not pass go. Do not collect $200.

Although it’s impossible to be both, several famous self-described JewBus exist:

As a Jew, I flirted with Buddhism myself when I was younger. It seemed more like a mindset than a religion, offering a path towards inner peace that didn’t conflict with the beliefs I already held. I later returned to Judaism -- a concept known as teshuva -- because it was hard to reconcile the idea that I wasn’t also connecting to God when I connected with myself. After all, there is something deeply spiritual in being connected with oneself, with one’s breath; it’s no coincidence that in Hebrew, the word for ‘spirit’ and ‘breath’ is the same (Ruach). Ultimately though, Buddhist Jews are like pineapple on pizza: sure, you could try to combine the two, but it doesn’t make sense.